My Paris E-Guides and Book

Sally
Following a successful career managing nonprofit organizations I decided to follow a long time dream and meld my avocations and vocational life into my company Your Great Days in Paris. I love France and immensely enjoy working with adventurous travelers to get to their best in this remarkable and richly textured place.

Jazz à la Villette is an annual musical celebration with an emphasis on innovative and experimental jazz and well known performers. Performances are held at the Parc de la Villette and other venues around Paris.  The Parc de la Villette is also home to the fascinating Cite de la Musique ‘museum’ and is the site for much music and film programming throughout the summertime. This is a part of Paris slated for ambitious cultural development in coming years. 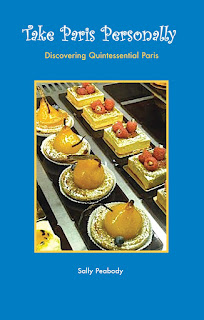 I am delighted to announce that my popular E-Guide "Take Paris Personally, Discovering Quintessential Paris" is now available as a book. This indispensable Paris guide will get you to your best in Paris on and off the well trodden path. Order from CreateSpace https://www.createspace.com/3386899 or through my website, http://www.yourgreatdaysinparis.com. The E-Guide remains available too. 164 pages of Paris information. Great for gifts, great for you!
Posted by Sally at 8:22 AM No comments: 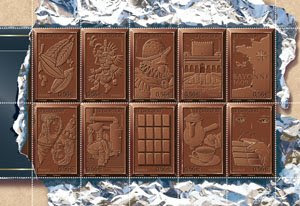 Now you have yet another option for enjoying French Chocolate when in Paris, or anywhere in France for that matter.  Well, actually, inhaling chocolate.... not consuming it.  The French Post Office, La Poste, has issued a series of postage stamps that commemorate chocolate and the fascinating history of chocolate in France.   The image above is from the La Poste website which also notes that chocolate has been the currency of wealth, the food of the Gods, the favorite of royal courts and kings, and, in contemporary society, favored treats for children, adults and foodies all.  These stamps commemorate the 400th anniversary of chocolate in France and they actually have a scent of fine chocolate imbued in the stamp.
The stamps were released in May at a philatelic enthusiasts gathering in Paris at the Grand Palais where La Poste actually built a temporary post office to celebrate the launch.  Next, the stamps were released in Bayonne, arguably the home and source of the great French Chocolate tradition.  Now they are available all over France.  10 stamps are 5.60 Euros.  However, these are also designed to be collectibles.
Ten different designs depict noteworthy scenes in the history of chocolate, including portraits of the cocoa bean  and of Cortes.  Cortes is credited with being the first to bring the beans to Europe after tasting chocolate in Mexico.  The stamps also feature a design that pays tribute to chocolate's arrival in Bayonne, in 1609.  Thereby hangs a bittersweet tale.  The chocolatiers that arrived in Bayonne were Jewish artisans fleeing persecution in Spain and Portugal. Bayonne proved a far more hospitable place and a grand French gastronomic tradition was born. Originally the food of royals and the very wealthy, chocolate became a beloved pleasure of quotidian folk in the 19th century.  I and I'm sure you, are ever grateful!
Best places to buy the Chocolate Stamps without having to stand in line are the all-night Paris post office located on rue du Louvre (corner of Etienne Marcel) and on line at http://timbres.laposte.fr/
Posted by Sally at 7:45 AM No comments:

Last Tango in Paris? Not a chance.

Tango by the Seine:

From late June through late August easy going crowds with people of varied ages gather on the left bank quais of the Seine in the Latin Quarter near the Jardin Botanique and the ‘En Plein Air’ sculpture collection. From dusk until late you can dance, often the dance is tango, and enjoy the music and the scene. No partner? No worries, you’ll find a ‘dance friend’. Metro: Jussieu or Austerlitz.  Walk towards the Seine, you will hear the music.  Nice weather only.  Yet another summer treat in Paris.

Bicycling in and around Paris 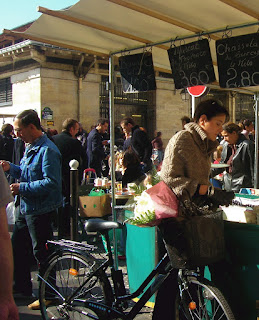 Summer in Paris.  Walking and bicycling around town are even more appealing than usual.  If you want to go it alone without a guide, rent one of those sleek grey Velibs that are positioned in rental pods all over Paris.  You don't even have to return your bike to the same place you rented it.
If you prefer a guided small group bicycle tour in Paris, or a wonderful all day tour to Versailles or Giverny, cut and paste these links into your browser and book for a memorable in Paris tour or a day to two of France's top destinations near Paris!  By the way, for Monet's Garden and Versailles you take the train to the nearby station and then bicycle. Picnic lunches are part of the full day tours. Lovely all in all.